For information on training this skill, see Ranged training.

Ranged is a skill in RuneScape Classic that is leveled by shooting ammo at monsters or other players. You get no Hits experience when ranging so the total ranged experience per kill comes from the monsters base experience plus the experience you would normally get in Hits. Using ranged, players can attack enemies from a distance but ranged cannot be used in combat.

Ranged influences your combat level as you level it higher, but acts as an alternative to Attack and Strength in the combat level formula. 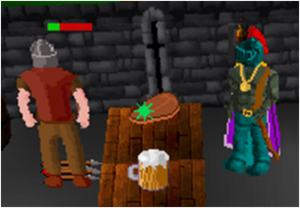 Like bows, the crossbow fires ammo but instead of arrows, it shoots bolts. There are only two crossbows in RuneScape Classic, only one of which can be purchased at the Varrock archery shop. The other is the Phoenix crossbow, which can only be received from the Shield of Arrav quest, through trade with other players, or from a general store, if someone has recently sold one there. There is no known stat difference between these crossbows.

Players cannot wield arrows. Having the arrows in the inventory while wielding a bow will allow the arrows to be fired. The higher leveled the arrows, the more damage they inflict against opponents. If a player has different arrow types, the higher type arrows will be used first. Arrows are slightly stronger than darts but weaker than throwing knives and spears.

Darts are one-handed weapons made using the smithing and fletching skills after completing the Tourist Trap quest The higher level the dart, the more damage it will inflict against opponents. Darts are slightly weaker than arrows.

Spears can only be obtained from various monsters. Like throwing knives, they are one-handed and can be used in both melee and ranged attacks. The higher level the spear, the more damage it will inflict against opponents. Spears provide the strongest ranged attack (damage) out of all options.

* Requires the player to have the Attack level to use that metal.

** Despite normally requiring level 10; has no skill requirements to use.

Holy water can be made after having gotten the Book of Binding and preferably whilst not having depleted the Shallow water from the Kharazi Jungle. It is used to weaken most type of demons, just like the Silverlight. On those monsters it behaves identical to throwing knives and darts.

* Requires the player to have made certain progress on the Legend's Quest, see the page for quest requirements.

** Although theoretically it doesn't require a ranged level to use, since Legend's Quest requires the Underground pass quest, having a requirement of 25, it becomes the minimum level for the item.

RuneScape Classic offers no equipment which raise the ranged bonus.

The Dwarf cannon is a powerful weapon, which fires cannonballs. You must complete the Dwarf Cannon quest to have access to it. Dwarf cannon cannot be used in player killing.