Free to play (also known as F2P) was the free version of RuneScape Classic.

Free to play RuneScape Classic was removed in the summer of 2005 when the game stopped being supported due to Jagex's focus on RuneScape 2 and widespread rule-breaking on the remaining servers. However, this was highly controversial, as it caused a large drop in the still-strong-in-2005 player base, and many RuneScape Classic PKers preferred playing on free-to-play worlds due to the absence of god spells and dragon equipment.

Free to play was more basic in comparison to the pay-to-play version, such as there being fewer quests, and a smaller game area. There were also advertisement banners above the game screen.

The content was essentially a snapshot of the game content in February 2002, there were very few updates that were not members-only after the introduction of pay-to-play. The changes that did happen mostly focused on core gameplay, e.g. the introduction of, and tweaks to the fatigue system, as well as bug fixes. 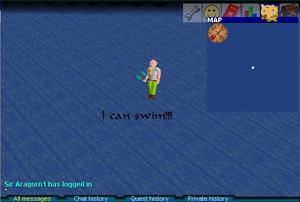