For information on training this skill, see the Mining Training article.

Mining is a skill in RuneScape Classic that allows players to mine rocks and obtain various ores and minerals. Ores can be smelted into bars and then forged into armour and weapons.

A player attempting to mine. A pickaxe bubble is visible above their head.

Before attempting to mine a rock, a player must have a pickaxe. The higher the level the pickaxe, the more swings the player will automatically take at the rock you are trying to mine with one click.

Unlike modern RuneScape, attempting to mine a rock containing ore you do not have the Mining level for does not warn you that you cannot mine it. You will instead receive the message "You only succeed in scratching the rock".

While mining rocks for ores, players may randomly find an uncut gem which include sapphires, emeralds, rubies and diamonds. Finding a gem from regular rock gives no Mining experience. Mining gem rocks found in Shilo Village is a faster way to obtain uncut gems but the mine can only be accessed after completing the Shilo Village quest.

The higher level rocks have greater likelihood of finding a gem and wearing Charged Dragonstone Amulet also increases the chance.

Uncut gems can be used in the crafting skill to create various pieces of jewellery.

The following certificates can be exchanged by Giles in Draynor Village or by Jinno in Zanaris. Certing ores is useful to trade bulk amounts easier and faster. 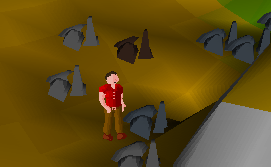 There are various mining sites in Runescape Classic each with their own strengths and weaknesses.

For a complete list of mines, see the Mines article.

For where to train Mining most efficiently, see Mining Training article.

Mining plays an important role in Digsite quest. Players can search the specimen trays, dig in level 1, 2 and 3 sites and pan for gold nuggets in the nearby river.

The following quests give Mining experience as a reward: 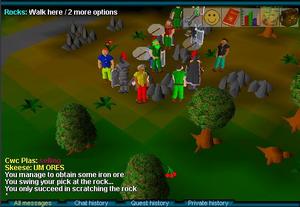 Before a hidden update Mining had to be done by using pickaxe on the rock.