From RuneScape Classic Wiki
Jump to navigation Jump to search
The RuneScape Wiki also has an article on: rsw:Carpentry 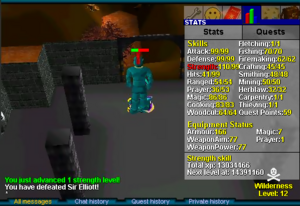 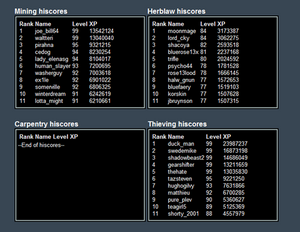 Carpentry was teased in the Hiscores

Carpentry was a skill concept in RuneScape Classic which was ultimately never released. It was listed in the skills list for most of 2002, but is now no longer mentioned anywhere in Classic.

When RuneScape released on 4 January 2001, there were Player owned houses on the east side of Varrock to be available for purchase "Soon". However, as RuneScape gained massive popularity, the idea as it originally was conceived became infeasible, and was forced to be scrapped. The houses were removed from the game on 26 July 2001 (Update).

After the addition of the Thieving skill on 30 April 2002, Carpentry appeared as a non-functional teaser in the skill list (underneath Herblaw). It was also featured on the HiScores page. Players speculated that Tiles, Planks, and Nails would be used in the upcoming Carpentry skill, and that the skill could be related to the earlier concept of Player owned houses.

The Carpentry skill remained in the skills list until the addition of the Agility skill, on 12 December 2002, 7 and a half months later. It was removed without comment or fanfare. Tiles were never given a use, while Planks and Nails remained only usable in quests.

Years later, speculation that Carpentry was related to Player owned houses would turn out to be true, as when the Construction skill was finally released on 31 May 2006, Jagex confirmed in the newspost:

Note - we were originally going to call this skill "Carpentry", but the range of activities involved in the skill soon got much bigger than that title, so we widened it to "Construction".