This article is about the condition that affects players and monsters. For the non-poisonous item used in the Ernest the Chicken quest, see Poison (item).

Poison affects players (not monsters) by dealing damage over time, even outside of combat. A player becomes poisoned through contact with a poisoned weapon, a trapped object, or a poisonous monster, such as a Poison Spider. Note that it is possible to be poisoned by ranging a poisonous monster. Additionally, the Paralyze Monster prayer does not protect you from getting poisoned. Poison can be cured by dying, or with a

poison antidote. Although both potions provide protection from poison, antidotes have the benefit of resistance from poison for a longer amount of time.

Weapons may be turned into a poisoned equivalent by a player with the weapon poison potion. Only certain categories of weapons can be poisoned: daggers, arrows, spears, throwing knives, and darts turning them into the poisoned equivalent. The poisoned weapon is capable of doing additional damage to an enemy slowly over a period of time.

Mechanics of being poisoned[edit | edit source]

Poison from monsters causes damage around once every 20 seconds (~34 game ticks). It can be stalled by logging out before the 20th second passes. The player will be damaged five times with one value, which then decreases by one, hitting five times with the lower value, and so on. This process can be reset by getting poisoned again.

The chance to be poisoned by a monster is considered to be random, and is not fully understood. There is no specific graphical variation for a poisonous hit splat, and it is shown as the same red hit splat displayed when receiving any other damage. The hit splat displayed when a player receives poison damage is the same colour red as any other ordinary damage, however later versions of RuneScape have graphical variations for types of damage received.

Players are unable to poison one another when Duelling but may poison when they are PKing. 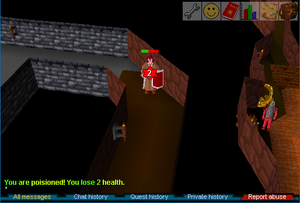 Player under the effect of poison

The strength of poison, which is the first hit, is shown in brackets.