From RuneScape Classic Wiki
Jump to navigation Jump to search
The RuneScape Wiki also has an article on: rsw:Duelling 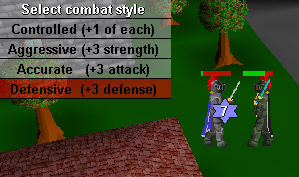 Two players in a duel

A Duel is a form of PvP combat initiated by two players right-click challenging each-other to a duel. It can take place anywhere on the world map.

Dueling is a very popular activity on RuneScape Classic. Draynor Village on World 2 is the most common place for players to duel. This is because it is the closest town with a bank to Lumbridge, which is where players are teleported after dying.

Most duelling happens at high levels (usually 99 attack, defense, and strength, referred to as "flats") using melee. Some players create melee pures for duelling with low magic and hits levels, or low level magic pures with a high enough magic level to cast Claws of Guthix.

Staking involves both participants betting that they will win the duel using items such as coins. The victor claims the loser's staked items and retains their own items. Hundreds of millions of coins as well as rare items such as Party Hats are won and lost staking in duels.

Melee-using players who are not "flats" (level 99 in all melee stats) often stake by Hits level instead of combat level. This works around Magic always raising players' combat levels. Magic is required for certain quests, for example, Family Crest and Legend's Quest. Players with a higher Hits level will be asked to "go low", or "go bare", by taking off armour in order to allow their opponent to hit higher numbers at the start of the duel. This is to make up for the difference in stats.

Switching is a combat technique commonly used by melee stakers. 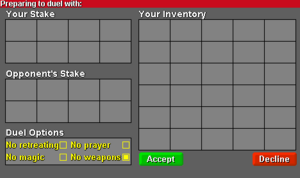 There are various options available which determine the type of duel.

When they are staking, players will nearly always use potions prior to the start of a duel in order to not lose an advantage against their opponent. When more expensive items are being staked, one player will usually provide a free "super set" (Super Attack Potion, Super Strength Potion and Super Defense Potion) to their opponent if they do not have one.

When a player dies in a duel they will not lose their items unless they were staked. This makes duelling a popular method to use as a free teleport to Lumbridge or way of restoring hits (particularly if near Lumbridge). 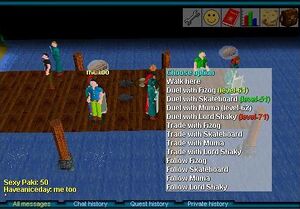 Although duelling was released on 27 February 2002, back in 29 September 2001 it was teased by "mistake", but would have been removed shortly afterwards. Development on the feature resumed on mid December of 2001.