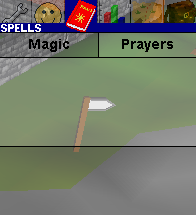 Upon merge, Prayer lacked prayers until 24 May 2001

PrayEvil was an early form of prayer that existed when RuneScape Classic was first released. It was the antithesis of PrayGood, lacked any prayers and was removed on 10 May 2001 with the update lots of small improvements.

Similar to Prayer, training PrayEvil was done by burying bones. Each bone gave 2.5 experience towards the skill, which is less than the 3.75 experience that bones give to Prayer modernly. Big Bones and Dragon Bones did not exist at the time.