The Holy water vial is a Ranged weapon that can only be used on Ungadulu to weaken the demon Nezikchened prior to your first fight with him. It CANNOT be used anytime else.

The making of Holy water is learned during the Legend's Quest. It cannot be made by players who have not made sufficient progress on the quest to obtain the Book of Binding. Once the book is obtained, the player has to read the Enchanto section of the book, to convert a regular empty vial into an enchanted vial. Then, a Blessed Golden Bowl, previously blessed by Gujuo and filled with pure sparkling clear water from the Kharazi pool, is used to transfer the water onto the vials to make Holy water. One bowl will fill up to 10 enchanted vials. 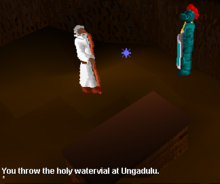