From RuneScape Classic Wiki
Jump to navigation Jump to search
Wikipedia also has an article on: wikipedia:Fatigue

Fatigue is a stat in RuneScape Classic which affects your abilities to gain experience. When your fatigue reaches 100%, you no longer gain experience from training in Classic. To recover from fatigue, players must rest and they may do so in a bed (or any of its variants), Hammock or in a sleeping bag. If the player has fast access to a bed from their training place, they should prefer it over their sleeping bag, as they provide very fast fatigue recovery. The only exception is the case of Crude beds, where its recovery rate is identical to a sleeping bag.

When resting, the player must type in the word sent over by the game to have the fatigue adjusted to the new value and be able to resume playing. Players who get interrupted when sleeping wont get their fatigue reduced and instead they will get the message: "You are unexpectedly awoken! You still feel tired". Being able to rest properly results in the fatigue lowered to the last value seen onscreen and the message "You wake up - feeling refreshed" is displayed.

Jagex added Fatigue as a mechanic to stop macroers, which ultimately failed due to the use of "Auto-Sleepers" and the fact that it was considered annoying by a majority of players. This caused Jagex to replace the fatigue system with "Random Events" in RuneScape 2.

It was planned that food would help the player reduce their fatigue, as explained by Paul in the private message, the first revisions of the official manual and the dialogue from the Fatigue expert. The concept, however, was scrapped and the official manual was updated near the end of 2003 to reflect it.

When the game server sends out an updated fatigue to the player, it sends it as an integer ranging from 0 to 750. However, this value is inaccurate and the server has the precise integer fatigue from the client possibly ranging from 0 to 75000, where 96% is 72000. As a result each 1% of fatigue is 750 server fatigue units, which we will call simply server units or SU. From tests done, it was found out the following relationship between SU and experience:

For example a gain of 50 xp would yield 800 SU or 8 fatigue units sent to client.

To get the percentage from the SU just multiply by

As such the final equation to get the relationship between fatigue and percentage is:

Note: Since the client does not hold the exact fatigue value, players should expect to see differences at times of 1 client fatigue when the experience they receive is not a multiple of 50/8 or 6.25 xp

The formula presented only applies to regular skilling, training melee combat gets 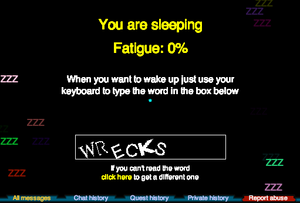