Influence, a former skill in the early days of Runescape Classic, was the predecessor of Quest Points. Completing quests would give a certain amount of influence instead of quest points.

Influence could be used to buy silk from the silk trader in Al Kharid at a lower price, and possibly was used to haggle with Baraek on the price of fur.[1] There were further plans for the influence skill to be used to barter and persuade non-player characters to do things,[2] but instead, the influence skill was reworked as the quest point system on 10 May 2001.

The Champions' Guild was reported to require the highest possible influence at any given time for players to access it.[3] However, due to the way influence was inconsistently awarded (compared to quest points), it's possible some exceptions to this rule were granted.

Note: values are common range, since the reward varied depending on the influence level they were done at 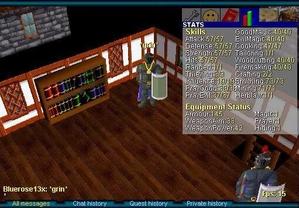 The expected maximum amount of influence before the transition to Quest Points in 10 May was 22.[6]