A player talking to a banker

A bank is a place where players can deposit their items for safe keeping. Items held in the inventory can be lost upon death, but items in a player's bank are always safe.

The RuneScape Classic bank is divided into 4 pages. Each page can contain 48 stacks of items, for 192 total in a player's bank.

Players first learn about how to use a bank on Tutorial Island, where a section of the tutorial is dedicated to walking a player through depositing and withdrawing items.

In RuneScape Classic, only one player can talk to a non-player character at a time. Because players must talk to a Banker to access their bank account, banking can be difficult in busier areas of RuneScape. 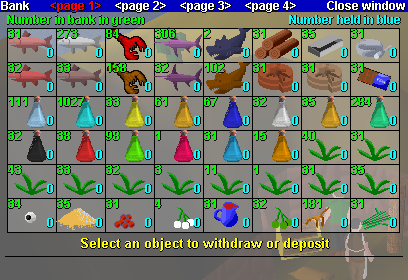 An example of a bank

Note that unlike RuneScape 2, there is no bank at the top of Lumbridge Castle. There is also no option to protect a player's bank with a bank PIN.