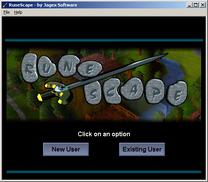 The title screen after 2004

RuneScape Classic (also known as RS1, RS Classic, or RSC) is the forerunner to RuneScape 2, which was the previous form of the game, being succeeded by RuneScape 3. It was originally created by Andrew and Paul Gower.

RuneScape Classic could be found on the official RuneScape homepage when searching for "Classic" in the game guide. It was during the Classic period when the game began to develop its cult status, leading to the demand which created RuneScape 2.

When the idea of RuneScape first came into programming, it was developed under the name of Devious MUD. Although never released, Andrew rewrote it, set it out as a beta for about one week, and then withdrew it. It was reworked, and released under the name of RuneScape as a beta in 4 January 2001. Later on in that year, the Gower brothers and Constant Tedder formed the company Jagex.

RuneScape Classic closed indefinitely on 6 August 2018. Prior to this, there were several closing and opening period where the game became acessible to new players provided that they hold active RuneScape pay-to-play membership. Previously, to access Classic, an account had to be Classic-enabled - having played once within the dates of 3 August 2005 to 3 February 2006, or logged in during at least one of the two-week temporary open periods.

In RuneScape Classic, players control a 2-D online avatar. These avatars can be customized by the player by various clothing, weapons, armour, and hair style. Many of the items needed to customize are sold by other players or in-game shops. The users can interact with each other by talking, trading, dueling, and participating in many other activities. Almost all onscreen actions are performed by pointing and clicking with the mouse.

Each player was connected to a "world", where all players in that world can interact with each other. Players on different worlds could private message each other. There was also been a patch to allow Classic players to message friends playing Old School RuneScape and RuneScape 3. At the time of closing in August 2018, there were 5 servers, sometimes referred to as "worlds" for RuneScape Classic. World 1 was for veteran players only, a distinction given to those who logged into RuneScape Classic between August 2005 and January 2006. Worlds 2, 3, 4, and 5 were the only worlds available to all players.

There are a variety of skills in RuneScape Classic, from combat skills, to gathering skills. Training skills is one of the things many people choose to do, as it can unlock many advantages over others in the game. Some of the advantages is able to produce your own armours, or fight a mighty foes. An example of a skill can be woodcutting, where a player chops trees to collect logs. Several advanced quests have high skill level requirements, particularly in combat.

Quests are an important part of the game play and progression in Classic. Some quests are standalone adventures, while others have multiple quests in a series, tell a longer story/adventure, and affect the world of the player more distinctly. There are quests which even allow the player to make their own choices, choose sides, and other variations which allow more freedom to the player. Quests can take a variety of skills to complete, with some having fairly high requirements for the players stats in order to complete or even start the quest. Once a quest has been completed, the player is rewarded with quest points, and often items, experience, new areas to explore, items to collect, NPCs to talk to, monsters to fight, and more.

The final quest to be developed and released for Classic was Legend's Quest. 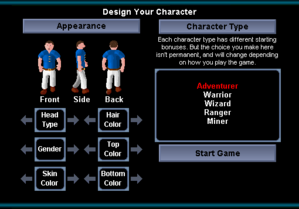 For most of the duration that RuneScape Classic was the main game, players used to choose a class when creating an account. Depending on the class chosen, players would start with a slightly higher level in the related skills, and given some bonus items to get started on that path. The class system was ultimately removed because the differences between the classes were too minor, and Andrew did not like that the game forced you to make a choice before you understood its consequence.[1]

The Official RuneScape Forums has a section for RuneScape Classic users. To gain access to these forums, you need to have a members account. These forums are hidden to those that are not logged in.

Before January 2009, anyone could have viewed the Classic forums, and many non-RuneScape Classic players were spamming and creating threads requesting RuneScape Classic to be reopened. Jagex closed access to the Classic section of the forums, and only users who had an active Classic account logged into the forums would be able access this board, by submitting an application in a dedicated thread.

After the temporary re-opening of RuneScape Classic in November 2009, Jagex re-opened the Classic section of the forums to all users, and it is now available without the need to submit an application.

On 11 November 2009, Classic was reopened to RuneScape Members.[2] This was done to raise awareness of the game and to allow curious players to experience it. Any members account that signed up in the two week period after the reopening would continue to have access to RuneScape Classic after the deadline. Further re-openings happened on 1 June 2010 and on 14 September 2011. Furthermore, it was re-opened in celebration of RuneScape's 15th anniversary between 11 January and 11 March 2016, after being announced at RuneFest 2015.[3] The reopening was then indefinitely extended.

RuneScape Classic servers were shut down indefinitely on 6 August 2018 at 10:06:23 AM GMT. The game is now inaccessible in its official form through Jagex. It is not known if Jagex will ever open up the servers again.

The section of Jagex's website where players could find access to Classic displayed only the veteran server (world 1) briefly after the shut down, however the server was inaccessible even by veteran accounts. The official Classic forums found on the RuneScape website were removed without additional warning on 10 August 2018.

With the games servers having gone offline indefinitely on 6 August 2018, it is now impossible to play the official version of Classic via Jagex.

Prior to the closure, there was no permanent direct link to RuneScape Classic from the RuneScape website. During the two-week open period in 2016, the link was the third button down on the right sidebar.

To access the game, players had to search for "Classic" in the search bar and find the RuneScape Classic world select page, which was once located at this URL. From there, the game was initially playable on the browser until they stopped running applets (in 2015). On that transition and onwards players needed to have installed the official downloadable game launcher where the games successors, Oldschool RuneScape and RuneScape 3, were launched from. For convenience it was advised to create a configuration and desktop shortcut to launch each world.