From RuneScape Classic Wiki
Jump to navigation Jump to search
The RuneScape Wiki also has an article on: rsw:Tailoring 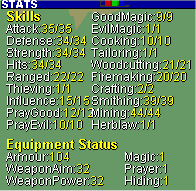 An early skills list which teased the Tailoring skill.

Tailoring was an early skill concept which would have been dedicated to creating things out of Wool, Furs, and Leather. Tailoring appeared in the skills list up until 10 May 2001, but it didn't have any function nor way to train it. Instead of being released as its own skill, the "tailoring ability" was released as part of the Crafting skill on 23 June 2001 (Update).

In a design document from 2000, Andrew Gower wrote ideas he had for a "Sewing" skill, which likely was the same concept as "Tailoring" under a different name.

Of these ideas, only the ability to make Wool, Leather, Leather Gloves, Boots, and Leather Armour would eventually be implemented in RuneScape, as part of the crafting skill. Water Skins and Clothing are only purchasable from shops.