Begin by speaking to King Lathas in the Ardougne Castle. Exit the castle and go through the gateway into West Ardougne. Make your way to the far north-west corner of West Ardougne, past the gravestones and zombies. Talk to Koftik and enter the cave. 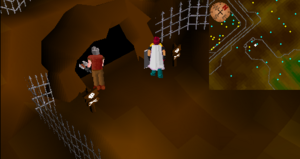 The immediate path to the west is blocked by a swamp. There is a path to the north that bypasses the swamp. Climb over the rocks and climb up the ledges to make your way to Koftik. Speak to Koftik and he will give you a damp cloth. Use this cloth on an arrow, then light it on the fire nearby. Climb over the rocks and up the ledge to the north to get a better view of the old bridge, then use the lit arrow on the bridge. The bridge will fall and you'll automatically cross to the other side. Mine the nearby rock to break off some rocks, then continue further down the path (to the south-east) until you come to another swamp. Use the rocks on the swamp to create a path across. If you accidentally click to "step over" the swamp, you will be washed away and tumble down a chasm and have to climb over rocks to get out. After passing the swamp you'll come to a pit of spikes. Use your rope on the stalactite to swing across.

Go past the giant bats and you'll come to a grill puzzle with 25 grills. There is some cookedmeat nearby if you need it.

The solution to the puzzle is as follows:

You'll come to a room with an altar and a well. From here there are four paths, each of which leads to an orb of light. Grab the journal on the ground if you want to read about the orbs.

North Passage: Pick up two of the nearby planks and go north to the passage. Use a plank on the passage to safely cross it and grab the orb of light; use your other plank to get back.

North-west Passage: Go past the rats and ogres. Pick up the pink orb of light and return to the main room.

West Passage: Disarm each trap and pick up the blue orb of light at the end.  If you fail to disarm one of the traps, you will trigger all of the previous traps and take damage from each. Be sure you have more than about 20 hits when trying to disarm the traps near the end. Disarm each trap to return.

South-west Passage: Use one of your ropes on the stalagmite and your character will tie the other end around their waist. Walk down the passage and it will fall out from under you. The rope will save you from falling onto the spikes. Grab the yellow orb of light and climb up the rope to escape.

You can search the stalagmite after this and retrieve your rope back.

Go east and return to the room with the zombies and the furnace. Use each orb of light on the furnace.

Go back west, back to the room with the well and the altar. If you have at least 50 thieving, grab a plank for a short-cut in the following segment. Enter the well and talk to Koftik. The crate nearby contains 2 salmon and 2 meat pies, if you need to heal. It can't be opened twice, even after switching worlds, so make the most of the food. If you need a rope there is one at the end of the path to the south. Continue west and you'll come to a room with goblins and four prisons with slaves. The north-eastern cell has some dug up soil. Pick lock the railings then search the soil to find a tunnel. Enter the tunnel, then go west and you'll come to a wall grill that is too high for you to climb. Use a rope on the grill and you'll be able to climb over it.

Immediately to the east is a pathway with lots of giant bats and rocks to climb over. If you have at least 50 thieving, you can take the southern path that bypasses the agility obstacles by picking the fence (be sure to use a plank on the passage at the end). Otherwise, go east and make your way past all of the bats and rocks. If you fall, climb up the nearby Pile of mud to return to the start. At the end, both paths meet up near a room with a worm hole which heals 12 hits. If players want to fill up on the Worm hole it is advised to world hop to save time. Continue west and climb up the ledge to enter a room with skeletons and a unicorn. 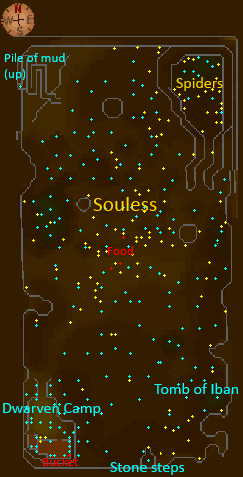 Talk to Koftik, then pick the railing to the east. Make your way past the Zombies and UndeadOnes, then pick the railings to enter the room with the three Paladins. Speak to the bearded paladin for some supplies if needed, including a 2-dose Prayer Potion. Kill three different paladins and pick up three coat of arms. Go west and search the rocks to disarm the trap. You'll come to a large cauldron called Flames of zamorak. Use each coat of arms on the cauldron, then use the unicorn horn on the cauldron. Open the Gate of Iban to the west and you'll be in a large open area.

Getting the Doll of Iban[edit | edit source]

Make your way onto the platforms and go far south. If at any time you fail one of the Agility obstacles and fall to the area below, you can use the ladder ("Stone steps") to the far south (recommended), or climb the mud pile at the north-west corner. You'll come across Kardia the Witch's house.  Ignore it for now, and continue south to the stone steps. Walk down the steps and go west to the dwarves' camp. Talk to each dwarf, then go back up the ladder where you came down.

Go west from Kardia the Witch's house and kill the 3 demons: Othainian, Doomion, and Holthion. Each demon should drop an amulet. If they only drop ashes, you may need to talk with the dwarves again. Once you have all 3 amulets, open the chest to get Iban's shadow. Use Iban's Shadow on the Doll of Iban.

Make your way south-east to the stone steps and return to the Dwarf camp. Talk to Klank and he will give you a tinderbox and Klank's Gauntlets. Pick up the nearby bucket and click "empty" on the barrel in the building to get some of the dwarf brew. Go east and find the Tomb of Iban. Pour the brew on the tomb, then light it using your tinderbox.  It will burn and reveal Iban's Ashes. Use the Ashes on the Doll of Iban.

Go far north-east and you'll come to railings. Squeeze through the railings and make your way into the spider nest. Find Kalrag and kill him. You will automatically smear the Doll of Iban with the spider's poisoned blood.

Exit the spider nest, go far north-west through the railings, then climb up the mud pile. Go west onto the platforms until you see a series of cages with Souless. Equip Klank's gauntlets and search each cage until you find the remains of a dove. If you don't equip Klank's gauntlets, the Souless will bite your hands. Use Iban's conscience on the doll to complete it.

Go south to find Iban disciples. Kill one to obtain some Robes of Zamorak (you might want to obtain multiple sets as the disciples do not drop them after the quest). Before you enter Iban's room, be sure you have at least 3 empty inventory slots. Equip the robes and enter the Zamorakian Temple. Iban will attack you with magic. Use your doll on the Pit of the Damned and Iban will be destroyed. The temple will collapse and you will fall into a room with Koftik. Talk to Koftik and he will lead you back to the entrance of the Underground Pass. Return to King Lathas to finish the quest. 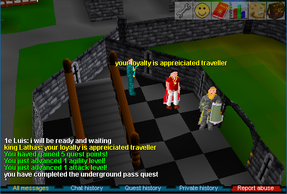