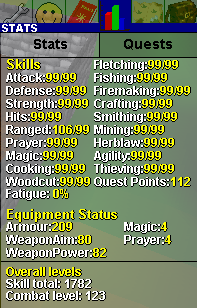 Stats is an in-game menu that contains two tabs, stats and quests. In the stats tab, players can see their skill levels, equipment status and overall levels that allows you to view both your skill levels and your quest list.

There are 18 skills, each with a maximum possible level of 99. The maximum experience achievable on a skill is 536,870,911 but may be overflowed, this is a difference from RuneScape 2.[Clarify]

Fatigue is displayed on the skills menu despite not itself being a skill, and rather a byproduct of performing skill actions.

Quest Points, formerly known as Influence is also shown among skills, despite not always having direct impact on skills or the actions involving them.

There are 5 equipment status stats, whose purposes vary from aiding in

Note: if a player places their cursor over a certain skill, they will see instead their current skill's XP and the next level's XP.

The quests tab displays the quest list and their status: green if the quest is complete, red otherwise. There are 17 Free-to-play and 33 Pay-to-play quests.

* The respective spells were merged to Magic until the 24 May with the update New magic system online!, where some spells were removed and others placed as Prayer. 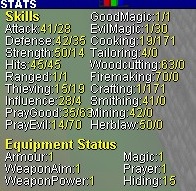