A glitch is a flaw/unintended effect within a game. RuneScape Classic has seen many glitches; here is a page where they are documented.

It was possible to cast spells very quickly before a timer was introduced.

A flaw during server maintenance caused all beds and sleeping bags to not work in all non-veteran servers. It was fixed shortly before the second reopening.

When a player was killed in the wilderness by the Claws of Guthix spell. The spell animation would continue to play on the spot the player died. Which resulted in an impassable object, either trapping players in places such as the Mage Arena or making it impossible to enter deeper wilderness that was behind a gate or web.[1]

An update on the day the wilderness was released fixed a problem where low level players were able to attack high level players (presumably with ranged or magic) without them being able to fight back.

Players who gained over the maximum 32-bit integer limit (2,147,483,647) of any item would be disconnected from the game and unable to login. Anyone who deposited over said limit into the bank found themselves unable to open their banks as they would immediately disconnect. It was finally patched on 16 February 2015. Any coins deposited over the limit now simply vanishes.

Players were able to make moderator crowns appear in public chat after they were added before a reopening. After some time, this was fixed.

With the use of packet construction through AutoRune, a cheating client active at the time, not only were items created and duplicated, but people could also:

Players have been spotted with no name.[3]

Not to be confused with the original Black Hole.

In certain areas of the game it's possible to go up ladders from certain positions and the player will land outside of the upstairs walls, allowing them to walk around in the infinite blackness and look at other upstairs buildings. They will eventually reach an invisible wall. The only way to get out is to already have a teleport or to bring another account there and to give you runes to teleport or kill you in a duel.

The bug is produced after not wanting the enchantment done from the confirmation menu. Clicking on any of the option produces the enchantment on the empty vials, draining the player's magic and prayer points. If player does not want to get the enchantment is best to click out of the menu.

Normally, Entrana disallows armour and weapons into the island. However, an oversight allowed Scythes to not be considered a weapon, thus making Lost City slightly easier.

The death bug is a humorous, but useless glitch in which a player dies from poison while interacting with an NPC/Object. If timed correctly, the player would die and the options to continue an interaction/conversation would persist. Known effects include:

An oversight in which Gnome Balls could be taken out of the minigame. Methods include:

It occurs when you attack a monster and then flee to talk to a nearby NPC. If you are still in dialogue with the NPC when the monster initiates combat against you it will take over the dialogue of the NPC. NPC dialogue options are still available and the monster will speak to you as if they were the NPC. 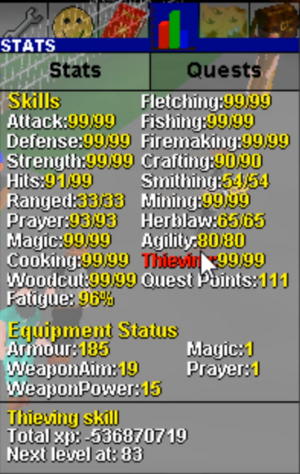 Negative XP as a result of exceeding maximum allowed XP

The negative XP bug should not exist for legitimate player. Theoretically the maximum experience for a skill is 536,870,911 (the maximum value of a signed 32 bit integer divided by 4, minus 1). However, unlike RuneScape 2 and the successors, in classic it is not capped. As a result should a player continue to gain experience after the maximum point, they will gain experience but from the overflowed (negative) number.

When there are a large number of players on screen, there were a number of issues that could occur: Chat messages/characters not appearing, player not being able to move, and right clicking will reveal a "player" named null (not to be confused with the actual player with the name Null) with a combat level of—1.

Players who run into this situation need to hop to a different server to log in to move their character. 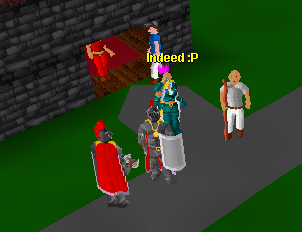 If you pick up Throwing darts while having some still equipped they will form another stack of darts.[4] 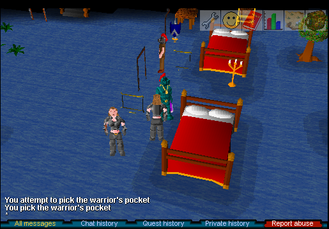 A screenshot of the Water World ground tile glitch occurring in the Varrock Castle.

You hammer the metal...
You make a mistake forging the bowl..
You forge a beautiful bowl made out of solid gold.

This was either fixed or never existed in later versions of RuneScape. 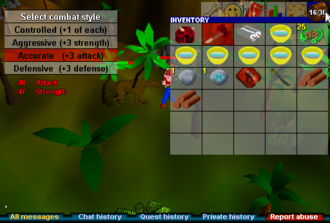 A player preparing to skip part of Legend's Quest.

Unfortunately, the programmers of the quest did not account for the scenario where the player dies. The Blessed Golden Bowl with Pure Water can be smuggled onto the ground by exploiting death mechanics. Players were able to die against the monsters of the jungle, fly with the gnome gliders from Al Kharid to southern Karamja, reobtain a machette at the Tai Bwo Wannai general store, and walk all the way back into the Kharazi Jungle just before the 10 minute death item despawn timer triggers. The player could then pick up one of their Blessed Golden Bowl with Pure Waters from the ground, germinate the tree seeds, then pick up the rest of their Blessed Golden Bowl with Pure Waters. The Yommi tree could be grown after this, since additionally, the programmers did not put a check on quest state to make sure that the player had actually restored the water to the jungle.

On 1 May 2001, an update fixed the problem with players stealing loot from players that had recently killed a monster.

On 18 August 2001, an update fixed a problem with the system that decided which player gets loot from a monster.