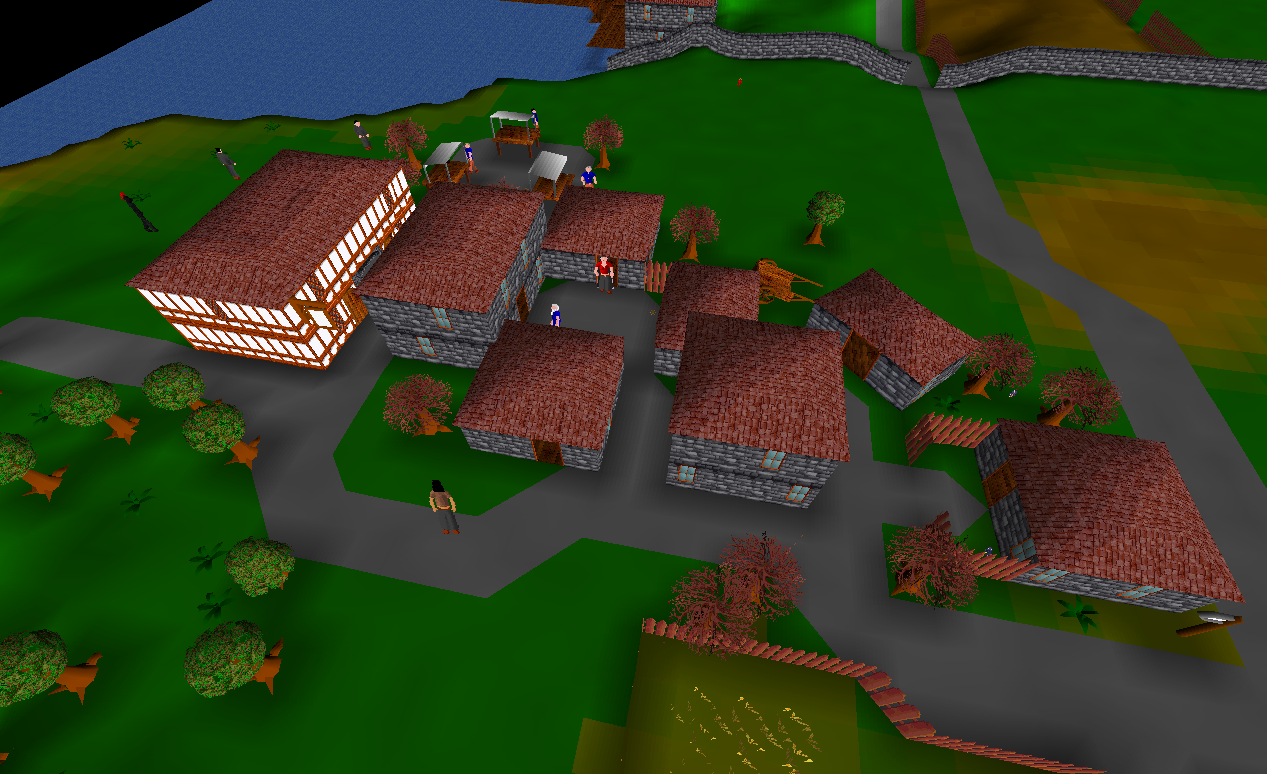 Draynor's market is just west of the bank and contains the certification stalls. As Draynor is the geographical centre of free-to-play RuneScape Classic and is home to the three certing stalls (Miles, Giles, and Niles), it is the unofficial trading centre of Classic. Players often gather in the bank, south of the bank, or east of the bank just south of the grain field to trade items.

Draynor Village is small, but its central south position on the free-to-play map area and its bank make it an important area. The low-level fishing spots and high density of trees in the nearby forest make it a popular place to train for new players.

Players can talk to Morgan in his house to start the Vampire Slayer quest. There is a spawn garlic which can be obtained by searching the cupboard upstairs. Only one may be collected at a time, however players can collect multiple by utilizing the drop trick.

Aggie the Witch has a house on the north side of Draynor Village. Players can bring her ingredients to get different coloured dyes and some other quest related items made. There is also a spawn of cheese and tomato, useful for cooking pizza.

Ned is a retired sailor and lives on the east side of Draynor Village. He makes ropes for players, if you give him either 15 coins or 4 balls of wool. He is also involved in the Dragon Slayer and Prince Ali Rescue quests.

The Draynor Village bank has always been a popular place for players to gather and trade, duel, and talk. This in part is due to it being the closest bank to Lumbridge, making it useful for players who are dueling. Another reason for the activity in Draynor are the certification stalls, encouraging trade. Occasionally an imp or a black knight will wander into the bank. Low level fishers and woodcutters also tend to utilize the bank.

The criminal Lady Keliand the jailguards are a group of who inhabit the jail east of Draynor Village. The jail plays an important part in Prince Ali Rescue.

To the north of the village is a large mansion. It is home to Count Draynor, whom Morgan tasks with destroying in the Vampire Slayer quest. The Ernest the Chicken quest also takes place here.

Main article: Wizard's TowerTo the south of Draynor Village is Wizard's Tower, home to many wizards and an important location in many quests.

This field contains many wheat crops which becomes grain when picked, an essential ingredient in processing flour. South of this field players will find Leela, one of the major characters in the Prince Ali Rescue quest.