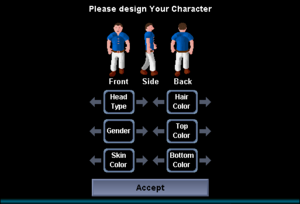 In RSC, there are two "Genders" to choose between in the player appearance screen. There is no in-game reference as to what these two genders are called, but it is obviously meant to be a "Male" setting and a "Female" setting. Gender is decided on Tutorial Island when first setting player appearance, but the player's gender may be later changed by visiting the Make over mage south-west of Falador and paying them 3,000 coins.

In game differences based on the Gender setting:[edit | edit source]