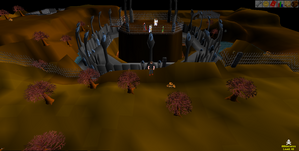 The Mage Arena is a mini-quest located deep in the Member's Wilderness that requires level 60 Magic (cannot be boosted). Upon finishing your duel with Kolodion, you can obtain a God Cape and God Staves. These items are required to cast the high-leveled God Spells.

In addition to the mini-quest which DOES reside in the Wilderness, the basement of the Mage Arena is NOT considered apart the wilderness and consists of two separate chambers. 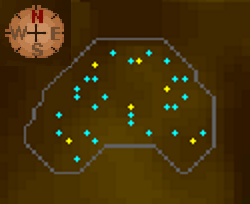 To access the main chamber, players need a knife or other bladed weapon to slash through the two spiderwebs in the building north of the Mage Arena. Once the webs have been cut head down the ladder. The main chamber contains Gundai the banker, Lundail who owns the rune store and Kolodion.

After a player has beaten Kolodion in the arena they may enter the Magical pool in the main chamber to be transported to the statue chamber. There are two Chamber Guardians who own a staff shop as well as three Statues and God stones for Saradomin, Guthix and Zamorak.

Players check the table below for what you can and cannot take with you into the Mage Arena:

It is recommended that players bring the best food they have and around 200 spell casts of their choice (Fire bolt or better recommended). Additionally, players should bring a knife with them to allow them to re access the Main Chamber, if they Retreat.

To unlock the God Spells you must duel Kolodion.

NOTE 1: Players are not required to duel him in all his forms in one go. If players die or leave mid-fight when they return they will continue the fight on the form they were last on.

WARNING: Players who have killed at least one form. The next time you speak to Kolodion he will send you back to the Arena (Assuming you do not have any prohibited items) WITHOUT any confirmation from you.

NOTE 2: Players who take too long to kill a form or engage in prolonged melee combat will cause Kolodion to despawn.

Defeating him in five progressively difficult forms while your Attack and Strength stats are drained to 0. You may only use magic to defeat the five forms of Kolodion.

Upon defeating the final form, you will be teleported back into the Main Chamber. Step into the Magical pool to be taken to the Statue Chamber to be rewarded with a God Staff and God Cape of your choice by praying to the statue of the appropriate God: Guthix, Saradomin, or Zamorak for the cape. To get your one free staff talk to one of the Chamber guardians. The two additional God Staves can also be bought for 80,000 coins each. You may only have one God Cape at a time. To change capes, you must drop your current God Cape and pray to the statue of the desired God to obtain the new cape. 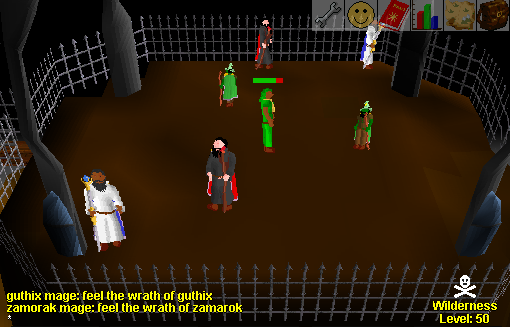 There are Battle mages inside the arena

The God Spells can be cast inside the arena with 60 Magic, the required runes, and the relevant God Staff equipped. Each successful cast grants 140 Magic experience.

In order to cast a God Spell outside of the arena, you must cast the spell 100 times within the arena. Also, damage inflicted by the God Spells can be temporarily doubled by casting the level 80 spell Charge.