Trade is the process by which one player can transfer or exchange items to or with another player.

There is an option when right-clicking on another player to trade with them, and doing so will result in the player who sent the trade request being displayed the message:

The player who received the trade request will be displayed the message:

Attempting to trade a player when a scenery object is between two players[Clarify] can result in the trade attempt failing and the following message to be displayed:

If they then right click on you and send a trade request, and are within range and no obstacles occur[Clarify], the trade screen window will be opened. This does not result in any message being displayed.

If either player declines the trade by clicking outside of the trade window or by clicking the Decline button, the following message will be displayed for the player who did not disengage the trade:

There are some items which are untradeable, and attempting to offer them in the trade window by clicking them will result in the player being displayed the following message:

In this window your inventory is shown to the right of the window, and to the left are two sets of 12 boxes arranged in a 4x3 layout, one set on top of the other. The player may can then click on an item in the inventory section and that item (if tradeable) will appear in the top window. Anything the opposing player being traded with clicks will appear in the bottom window.

When a player wishes to perform the trade, clicking the accept button result in the opposing player's window to display that the "Other player has accepted". When both players have accepted the trade, a second screen will prompt the players to review what they are about to trade and what they are about to receive should they click accept a final time. When both players accept on this second screen, the items submitted into the trade will be transferred to the other player, and the items the other player had put in will also be transferred. The window will then close, resulting in the message:

If you do not wish to trade with the other player, you can click the decline button and the trade screen will close. Note that clicking outside of the bounding window will decline the trade for both players. 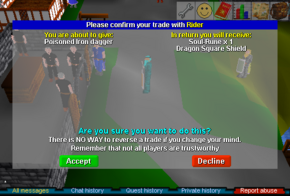 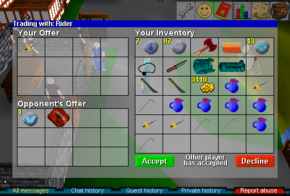 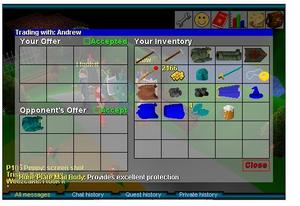