Not to be confused with Asgarnian Ale

A Beer is consumable item that, when consumed, heals the player by one hits and boosts their strength level by 4% (rounded down) and reduces their attack by 7% (rounded up). It can can be bought from the many bartenders found throughout RuneScape Classic for two coins each. There is also a respawn of beer in the Longhall of Barbarian Village.

One beer is a necessary item required to complete the Vampire Slayer quest by getting Doctor Harlow to give you a wooden stake. Three glasses of beer are required to get the Jail Guards in Draynor drunk during the Prince Ali Rescue quest. Beer can also be used to train Attack beyond level 8 on dummies (without receiving Hits experience).

These beers can be purchased from bartenders at the following locations

They are dropped by: 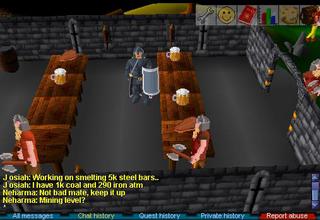 Beer respawn at the barbarian village.
Retrieved from ‘https://classic.runescape.wiki/w/Beer?oldid=101488’
Categories: