The Shapeshifter is a monster encountered in the Witch's House quest. It changes into four forms and each must be defeated in one go order to retrieve the ball and complete the quest.

If a player flees during combat to heal or leave, they will have to restart the fight.

Shapeshifts take awhile to de-spawn when you flee from combat, which can result in an increasingly packed shack. 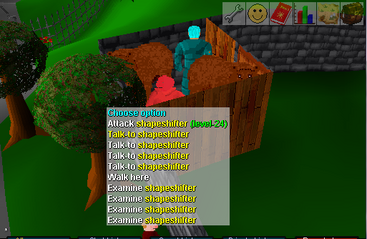 When players fight the shapeshifter the following messages are displayed: