Coins, also known by players as gp or gold pieces are RuneScape Classic's currency, traded from player to player and NPC to players. It is sometimes referred to as gold coins or gold by players and within quests. They are dropped by many monsters and can be given as rewards for completing quests. Players may also obtain coins by selling items to shops and from picking up various item spawns found through out Gielinor in Classic.

There are several efficient and popular ways to obtain coins, and some methods involve the use of many different skills. As players complete quests, explore, and increase their skill levels, the amount of gold they are able to collect can increase. Almost every skill can be utilized by the player to aid in the task of collecting gold.

During the Shilo Village (quest) players will need to go through Rashiliyia's Tomb. Within the tomb are coins on the ground. However, once picked up the coins will turn to dust and UndeadOnes and Skeletons will spawn to attack the player. 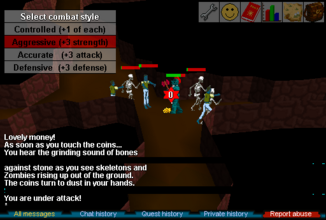 Player getting attacked because they picked up the coins

When players pick up the coins:

As soon as you touch the coins...
You hear the grinding sound of bones
against stone as you see skeletons and
Zombies rising up out of the ground.
The coins turn to dust in your hands.

The coins turn to dust in your inventory...

That's already made of gold! 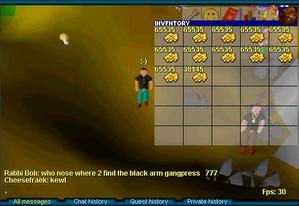