This article is about the item. For the minigame, see Gnome Ball (minigame).

A Gnome Ball is an item obtained in the similarly named minigame, Gnome Ball. Unlike its RuneScape 2 counterpart, the gnome ball is not awarded during the minigame and cannot be traded.

Attempting to leave the minigame with the ball via the gate:

you have to leave the ball here

Selecting shoot while not near enough to the goal:

you need to be nearer the goal!

Throwing the ball to another player:

Receiving the ball from another player:

Warning! [Player who is passing ball] is shooting at you!
you catch the ball 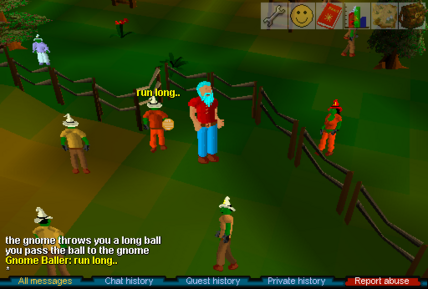 Shooting and missing the goal:

Shooting and making a goal:

you throw the ball at the goal
it flys[sic] through the net...
into the hands of the goal catcher
Cheerleader: yeah
Cheerleader: good goal

The ball may be transferred from player to player even outside of the minigame by "passing" the ball. This is done by right clicking and using the ball on a specific player. The only other method to obtain them is through smuggling the ball oneself.

There are various methods a player may utilize to smuggle a gnomeball for use outside of the minigame:

The most common method is to drop the ball in front of the gate, walk through said gate, then cast Telekinetic grab to retrieve the ball. This is the expensive way to obtain one, yet fastest. It requires level 33 magic.

The second method is to hold on to a Gnome Ball, then teleport away. Yet another expensive method, and possibly the slowest due to the need of walking back to the minigame. It requires at least level 25 magic. The closest teleport is the Ardougne teleport which requires level 51 magic and completion of the Plague City quest.

This last method is the cheapest, but unfortunately slow due to only able to smuggle one at a time. It requires players to stand in a very specific spot, click the "shoot" option to pass the ball to a Gnome Baller, and quickly exit the minigame. If done correctly, the ball will be passed back to the player just as they exit through the gate.