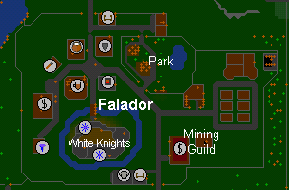 Falador is a large city in RuneScape Classic. It is the capital of Asgarnia, and is led by the White Knights. It is protected by several guards, has two banks, a park and it is also home to the Mining Guild and the White Knights' Castle.

The Mining Guild is located in Falador, its entrance is north-east of the Falador east bank. You need 60 Mining to get in the guild.