It may not accurately reflect the last version of RS Classic.
Blackhole 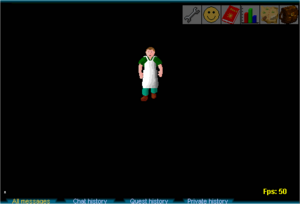 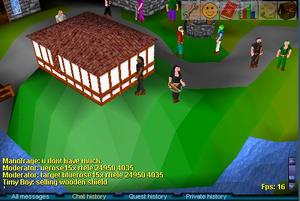 The Black Hole was an area that used to be the location of where banned players were sent. The entrance was found in the Dwarven Mines, where currently Boot the Dwarf is located, and was owned by Thordur. Curious players got themselves banned just to see this place which led to Jagex introducing the Disk of returning on Thordur's shop. For 10 coins he would sell the Disk of Returning that allowed the players experience the Black Hole, either by going down the ladder or spinning the disk. In the black hole, however, the only escape was to make use of the disk. Players often exploited this to uninformed players by claiming that "something cool" happened when the disk was dropped, leaving them trapped until they were rescued by Jagex moderators. The black hole was removed in late December 2001 and Thordur along with it. The disk, however, remained and is now a highly prized item in both RuneScape Classic and RuneScape 2.

Boot the Dwarf gave the reason behind the removal of the Black Hole in an official post on the RuneScape Classic website.

Excerpt from Postbag from the Hedge:

Thordur used to have a theme ride really close to my little shoe, er, sorry, cave. I used to live in a shoe you see, it's easy to get confused… but anyway, he was forced to close it down. You see, it was a magical journey to some really dark, really empty shoes. I mean caves. People wanted to see the “black hole”, a place where all the naughty dwarves were sent when they had been bad. My mother used to tell me that I would be sent there if I didn’t clean my shoe in the morning. I used to live in a shoe you see. That’s why I am called Boot. Anyway, Thordur ran into problems with the board for Dwarven tourism who had issues with some humans who didn’t like shoes. No, hang on, that’s not it… no, wait a mo… They had become stuck out in the blackness. The black guard had tried to shoe them, err, I mean shoo them out, but they, like all humans, wouldn’t stop complaining. So he had to close the place down. Anyway, the secure cells they send bad folks too are far more organised now, so the tale of Thordur's black hole is more of a legend these days. Now, where’s my old woman gone?