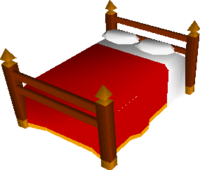 A bed is a piece of scenery which can be used to lower fatigue. They can be found in many houses in RuneScape Classic, often upstairs. As with sleeping bags, players need to type in a certain word in order to wake up. The key difference is that fatigue lowers much quicker when using a bed. However, this usually comes with the expense of extra travel, which makes beds only suitable for certain activities which do not require players to be in a specific location, such as making arrows.

There are 151 "Normal" type beds type beds, and 25 "Red ornamental" in RuneScape Classic. The normal type beds can be found in most homes which house an NPC, but some of RuneScape's most elite have the fancier bed.

There are too many normal beds all over RuneScape to list them all. However, it is interesting to note who is fortunate enough to own the fancier "Red ornamental" type bed.