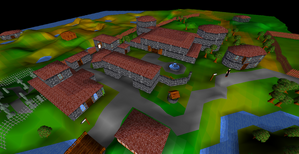 Lumbridge is a town in the kingdom of Misthalin, north west of Al-Kharid and south of Varrock. It is the starting point for new players, and they can often be seen running around. It has many useful locations, such as a cow field, a chicken coop, an axe store, general store and more. Should a player die, they will respawn here, with only their 3 most valuable items. There are a few men in the castle to pickpocket for money.

Players who are used to RuneScape 2 will notice that the normal men is a level 9 on RuneScape Classic instead of level 2.