Moss giants are large humanoid monsters which can be found in the Varrock sewers, on Crandor and Brimhaven, north of East Ardougne, inside Strange Barrels, and in the Wilderness.

Giants of all types always drop big bones which can be useful for Prayer training, though regular Giants are a more efficient source of big bones. This is due to Moss Giants spawns being relatively spread out.

Moss Giants are also the only monster to drop Magic Staffs and the sole and only source of Black Square Shields in the entire game.

These are the only monster in the game to drop Spinach rolls. When Runescape Classic was just beginning, there was a popular scams where players overstated the rarity of the item to uninformed players. This allowed them to exploit the knowledgeable player for whatever means that they could. There is only one other way to acquire this item, Moss Giants are the fastest way, now with the crystal chest being broken as of the time of this writing. 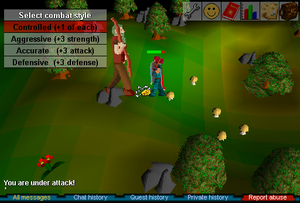 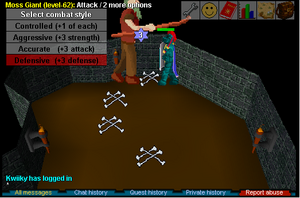 A player fights a Moss Giant in the Varrock Sewers

All herbs are dropped in Unidentified form.