Varrock is the capital of Misthalin and is one of the largest cities in RuneScape Classic. This city has many good shops for new players, and adventurers come from all parts of the world to trade their wares as well. 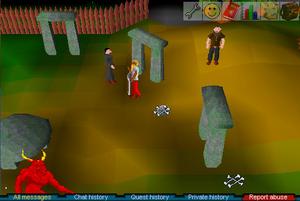 The stone circle of varrock

Boasting twin banks - one near the west gate and one near the east - makes Varrock a great place to do trade.

Varrock Palace is well-protected by Guards and Warrior women, and the King resides within the palace. Some players choose to train their Thieving on guards here. In the northern part of Varrock's Palace is Reldo. He plays roles in the Shield of Arrav and The Knight's Sword quests, and works at the library.

There are three pubs in Varrock. Blue Moon Inn is located in the south and it is featured in some quests.

East of the Blue Moon Inn through the gated area there is the Dancing Donkey Inn selling beer. Da Vinci, Chancy, and Hops play a role there during the Biohazard Quest.

Northeast outside of the city and near Lumber Mill is Jolly Boar Inn.

There are two guilds in the outskirts of the city. Southwest is the Champion's guild, which requires 31 quest points to enter. The guild has two stores which sell various items made from Runite, Adamantite, Black as well as the blue cape. This guild is also the starting point for the Dragon Slayer quest.

Experienced cooks with Cooking level of 32 or higher may enter the Cook's Guild in the northwest. It is also required to wear a Chef's Hat.

East of the palace is a manhole, leading to the Varrock Sewers. This dungeon boasts a variety of different medium-levelled monsters, including giant rats, zombies, Deadly Red Spiders and moss giants. It's also one of the only sources of red spider eggs, an ingredient used in Strength potions. 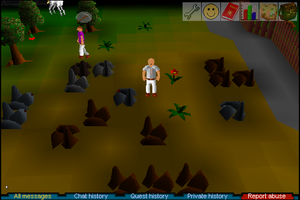 Southeast mine is one of Varrock's rich resource areas.

The Lumber Mill is found on the northeast outskirts of the city, near the Jolly Boar Inn. It plays an important role in the Gertrude's Cat quest.

Other points of interest[edit | edit source]