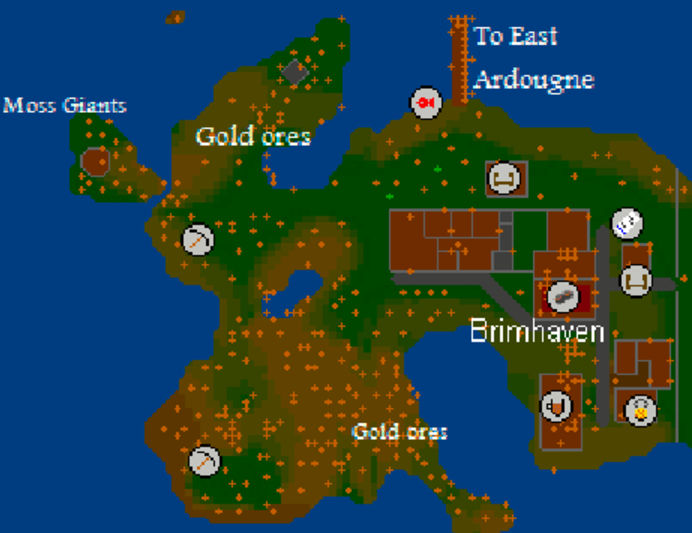 Brimhaven is a town located on the west side of Karamja. It is mostly inhabited by pirates. It also has a port that leads to Ardougne allowing a safe alternative route for new players entering Kandarin. To get to Ardougne from Brimhaven, go to the north of Brimhaven where there is a dock and talk to the Customs Official, it will cost 30 coins to board the ship and ride to Ardougne.

Brimhaven mansion is the large western building and it is featured in the Hero's Quest. It contains:

The Shrimp and Parrot[edit | edit source]

East of the large mansion is a restaurant called The Shrimp and Parrot. It has a strong Phoenix Gang presence.

Dead Man's Chest is a pub south of the restaurant. It is filled with Pirates and has a bronze axe spawn.

The base is for Black Arm Gang members on the Palm Street near Member's Gate and east of the restaurant. 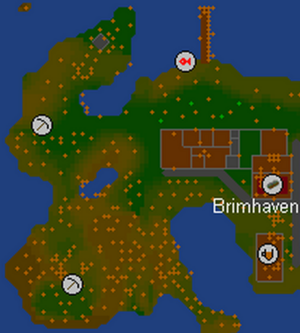 Moss giant island can be reached through Tree Swing and it requires level 10 Agility. The small island is inhabitated by level 62 Moss giants and there is also a quick spawn of Slice of Cake and a bed.

There are multiple poisonous Tribesmen around their Tribal brew in the southwest. There is also a Stone head nearby that points to the northern Gold rocks and the entrance to the Fisher King Realm (grey area in the northwest on the map).