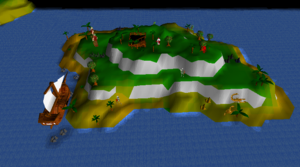 Crandor is a small abandoned and mostly uninhabited island situated south of Entrana. The island was destroyed many years ago by the green dragon Elvarg. This island is central to the completion of the Dragon Slayer quest. There also is a tunnel passage that leads to underneath Karamja Volcano, where Elvarg's lair can be found.

Crandor was released 23 September 2001 as part of the Dragon Slayer quest.

Crandor was once a major trading city in the early Fifth Age. However, Elvarg invaded and destroyed the whole island, killing many if not most of its citizens in the process. The island is now overrun with monsters and remains the home of Elvarg, whom the player is tasked to kill by Oziach.

Partial completion of Dragon Slayer is needed to first reach Crandor. The Lumbridge Lady must be purchased with Ned onboard and a completed Map. Talking to Ned onboard the ship will set sail to Crandor.

Players can return to Crandor again if they repair the hole in Lumbridge Lady and speak to Ned again on the ship. Alternatively, Crandor may be accessed via the secret door underneath the Karamja Volcano once Dragon Slayer is completed.

Though mining ore from Crandor is often impractical, there are several rocks available.

At the top of the mountain on the island there is a set of stairs leading downward to the dragons lair. There are large level 54 and level 31 Skeletons wandering in the first part of the dragons lair. Past the stairs is a door leading to the fire breathing dragon Elvarg, and further ahead past the Lesser Demons there is a secret door which leads to the Karamja Volcano interior. This will allow the player to return to Crandor during/after the events of Dragon Slayer, however Elvarg may only be killed once.