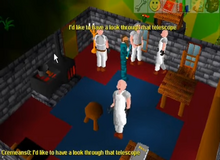 Talk to the Observatory Professor and ask to look through his telescope. He tells you that the Goblin residents have been causing trouble and tampered with it. He asks you to collect 3 different items. Hand in all 3 items, and he will return the molten glass while asking you to find the lens mould. 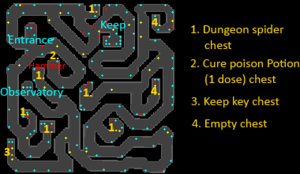 Go down the ladder in the Observatory post, into dungeon. Go through the maze to the far south west corner and you find a chest containing a keep key. Go to the room where a level-48 Goblin guard is (labeled "keep" on the map), kill him before using your key on the gate (or else the key will be broken and discarded, which you will have to get another one again). Search the sacks to find lens mould.

The Goblin guard does not need to be killed in order to open the gate. It is possible to simply fight him for the first 3 mandatory rounds of combat, retreat and quickly use the key on the gate, which will allow you to pass through it.

Go back down to the dungeon, and through the maze, and find another ladder north of the chest containing the key to the gate. It leads to the Observatory. Talk to the Professor and look through the telescope to get a constellation.

After looking through the constellation, either continue the talk with the Professor or look again through the telescope if you want another roll at the possible constellations, leading to a distinct dialogue case and reward.

This calculates the amount of experience received based on certain last observed constellations in the respective skill listed above.

Speak to the Spirit of Scorpius, at the graveyard to the north. He will give you an Unholy Symbol mould, which you can use to make Unholy Symbols of Zamorak. If asked, he will also bless these symbols.

Although the making of the lens requires a Crafting level of 10, it can still be done (without boosting) if the player's Crafting level is below that level producing the message:

"Sorry, you need a crafting level
Of 10 or above to use this object
You pour the molten glass into the mould
And clasp it together
It produces a small convex glass disc"