Go into the manor and go up the stairs, then go up the nearby ladder to reach the 2nd floor[UK]3rd floor[US]. Talk to Professor Oddenstein. When you ask him about Ernest, he says that Ernest is helping him with his experiments but that he was turned into a Chicken by the professor's "pouletmorph machine."

Leave the Professor's room, go down the ladder and grab the Fish Food in the eastern room. Now go downstairs to the ground floor[UK]1st floor[US] and pick up the Poison in the small western room near the Witch. Use the Poison with the Fish Food to create Poisoned Fish Food. 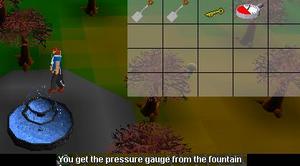 Go north of the water fountain to the Cabbage patch. Use the Spade on the nearby Compost Heap and you will obtain a Closet Key. Go back into the manor through the front entrance and use the Closet Key on the door to the small room behind the staircase leading to the 1st floor[UK]2nd floor[US]. Enter the closet and grab the Rubber Tube. Note that the Skeleton is non-aggressive, so you won't have to worry about him attacking you at low levels. Use the key on the door again to leave the room. 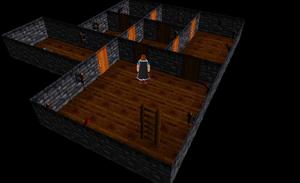 Head to the south-western room on the ground floor[UK]1st floor[US] and go down the ladder. This room contains a puzzle solved by pulling levers. Pull the levers in the following order:

Now head back to the 2nd floor[UK]3rd floor[US] and talk to Professor Oddenstein. He will take all the parts from you, start up his machine, and then transform Ernest back into a human. Ernest will thank you for helping him and give you a reward, finishing the quest.