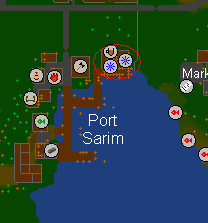 The Rusty Anchor, the starting point for Goblin Diplomacy.

Note that obtaining all the items before starting this quest will greatly reduce the amount of time it takes to complete it.

Talk to the Bartender in Port Sarim. He's located in The Rusty Anchor in the building beside the fence separating Port Sarim and Draynor Village. The bartender will tell you that some Goblins are fighting about the colour of their armour in their village. Head to Goblin Village, located to the north past Falador and Doric, and talk to either General Bentnoze or General Wartface. The goblin will tell you that he would like orange-coloured armour.

If you don't have any Goblin Armour on you, kill some Goblins until you have three of them.

To create orange dye, you'll need two onions, three redberries, and 10 coins. Onions can be obtained from the field behind Farmer Fred's house, located on the path leading from Draynor Village to Lumbridge. Redberries are located to the west of the small mine south-east of Varrock. Once you have the two onions and three redberries, visit Aggie in Draynor Village. She can be found in the house that has two red dots in it on the mini-map (representing item spawns for cheese and tomato). 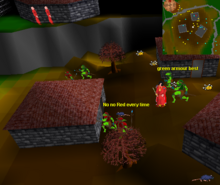 Ask her to make you a red and yellow dye. When you have both, use one on the other to mix them to create orange dye. Now use the orange dye on the Goblin Armour. Return to Goblin Village and talk to one of the Goblin generals and they will take the orange armour. They will say they don't like the colour and want to see dark blue-coloured armour.

Go to Falador Park and talk to Wyson The Gardener and ask about woad leaves. He offers to sell them to you for a price. Choose the highest price, 20 gp, and he'll generously give you two woad leaves.

Now go back to Aggie, have her create blue dye (costs two woad leaves and 5 coins), use the dye on the goblin armour, and head back to Goblin Village. Talk to one of the generals again and give them the blue armour. Talk to the goblins and they will take the blue armour. Again, they will say they don't like the colour, and instead want to see how light blue armour looks.

Talk to the generals with a regular Goblin armour in your inventory, which they will take from you. The two generals like it and thank you for sorting their argument, bringing the quest to an end.