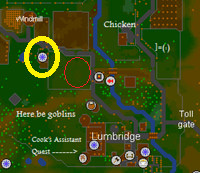 To start the quest, talk to Fred The Farmer and tell him that you're looking for a quest. He will ask you to shear his sheep and bring him 20 balls of wool. If you don't have any shears on you, you can buy them from the Lumbridge General Store for 1 coin.

Leave Fred's house and enter the fenced area located on the east side of his house, which is his sheep pen. Use the shears on his sheep until you have 20 pieces of Wool. You may occasionally fail to shear them; simply keep trying and eventually you will be successful. You can also shear the same sheep infinitely rather than running after different sheep.

Now simply return to Fred with the 20 balls of wool, and he will take the wool from you one by one, completing the quest.