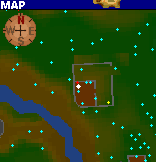 Talk to Councillor Halgrive. He will explain that 4 plague sheep escaped from West Ardougne! He says you have to kill the sheep and then burn their remains in a furnace.

You need to be wearing protective clothing before you start, so buy a set of plague clothes (Protective trousers, jacket) for 100 coins from Doctor orbon inside the church.

Now head to Farmer brumty's farm, north of East Ardougne, and pick up the Cattle prod from the ground.

Prod every kind of plague sheep a few times, and it will jump into the enclosure. Once inside, kill it by using Poison animal feed on it. If you do not kill the sheep in about 90 seconds after luring it into the enclosure, it will respawn back at its original location and you will have to lure it back in all over again! Every plague sheep will drop plagued sheep remains which should be used on the cattle furnace found in the small house inside the enclosure.

The sheep are found in the following locations:

Once all of the remains have been incinerated, return to Councillor Halgrive and receive your reward!