After speaking with Lady Servil, you will learn that some of her family has been imprisoned near the Fight Arena. Head south-west to get to the Fight Arena area.

In order to infiltrate the prison, and rescue the prisoners you will need to look like one of the Khazard Guards. After speaking to a local (you don't need to) you may learn that the only way to "visit" prisoners is to wear Khazard armour.

You should prepare yourself with food, potions, and weapons at this point. If you are a lower level, it is highly recommended to bring teleport runes, as you will not be able to escape until General Khazard!

You may simply leave the arena through the door. 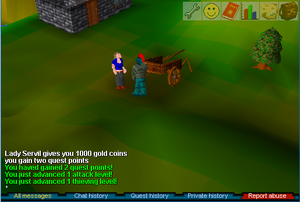 After leaving the fight arena, head back north-east and claim your reward from Lady Servil.

"From above you hear a voice...
Ladies and gentlemen!
Todays[sic] first fight between the outsider
And everyone's favorite scorpion has begun

From above you hear a voice...
Ladies and gentlemen!
Todays[sic] second round
between the Outsider and bouncer"