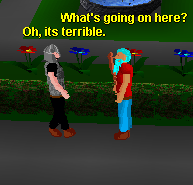 First, talk to the guard by the fence. Enter the mansion and walk to the room in the east, where a dagger lies on the ground. Take the Silver dagger and the Murder Scene pot, then investigate the window to get a thread. Take note of the dog outside and search the gate for your second piece of evidence. Now; search the barrels found in most bedrooms. There are 2 barrels downstairs, and 4 barrels upstairs. If you've looked in each barrel, you should have these items:

Go downstairs to the shed in the garden, investigate the sacks, and you will find some flypaper. Take 7 of them. Go to the kitchen and use your pot on the Flour Barrel and use it then on the Silver dagger and then on a flypaper. Do this again with all your silver items. Use the unidentified fingerprint on everyone's print until you find out whose it was to get the murderers fingerprint. You may now drop all the silver items.

Now, walk down the road to Camelot and find the Poison Salesman along the way. Ask whom he sold the poison to. He will tell you that everyone had bought some. Now, go back to the mansion and talk to the person whose fingerprints you matched. Ask them why they had to use his poison. Then, investigate the object they were talking about. A message will appear that there isn't poison in there. Go back and talk to the guard to receive your rewards.