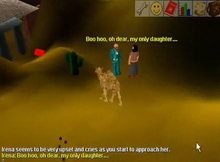 Before you start the quest, make sure you have all the materials needed for the quest. Remember, you can get them all from Shantay if you don't have them!

Talk to Irena in front of Shantay Pass, and find out what's wrong. She'll tell you that her daughter went missing in the desert. Ask her either where she'd gone or what did she go for, then after a brief conversation, agree to look for her daughter. Head south following the Disturbed sand until you find the Desert Mining Camp.

As soon as you spot the Mercenary Captain, do not talk to him or attack him. You'll only get thrown away. Instead, select the "watch" option, and you'll notice an important detail - The captain doesn't do his own battles! Now, armed with knowledge, talk to the captain and select the first option; Hello. He'll basically tell you that you're not welcomed here, and instead of angering him, you should select the second option; to offer something in return of his time.

Now interested, he'll tell you to assassinate a bandit leader before coming back. REFUSE TO DO SO! He'll threaten to have his men throw you away. Now if you had selected the "watch" option a couple conversations back, there would be an option to taunt him about how he can't fight his own battles. He'll be enraged and attack.

For the battle, it is highly suggested to be heavily armoured, along with some food or Restore prayer potions if your going to use Paralyze Monster. Kill him and he'll drop a key. Make sure you have space for it; you automatically pick it up. Before you open the Iron Gate, unequip your weapon and all your armour. If you don't, you'll be thrown to jail. The only way out is through a window using the "search" option.

Talking to the Mining Slave

Go into the building and up the stairs and search the desk, you will find a Cell Door Key. Now go downstairs and outside the building and talk to a Mining Slave. He'll ask how long you've been here. Tell him that you've just arrived, and he'll reveal to you his plan to break out. Pretend to be interested, and after he tells you that there's a problem, ask him what it is. He'll tell you that he cannot undo the handcuffs; Offer your assistance. After he complains about people backstabbing him before, select the first option. After some talk, agree to help him (again). You'll unlock the handcuffs - Note that this may take several tries. After your done, you'll swap clothing and you'll be given a set of Slave Robes.

Mercenaries preventing the player from going deeper into the mine.

Open the Wooden Doors that are kind of hidden to the north-east part of the camp. Within the mine, there are several level 50 Rowdy Guards that are extremely aggressive that you should avoid. Go to the end of the mine, and talk to one of the two mercenaries there. Request to move further down the mine, and then agree to what he said. He'll request a Tenti Pineapple, and then ask if you understand. Say yes, and get out of the mine.

Remember the Cell Door Key you took from the desk? It allows you to enter the jail cell in the building. Enter it and search the window to escape. Head immediate west from the camp, until you find some tents along with several Bedabin Nomads - the Bedabin Camp. Enter the largest tent, and ask Al Shabim for a pineapple. He'll tell you to retrieve the Technical Plans in exchange for a Tenti Pineapple. After he gives you the Bedobin Copy Key, walk your way back to the camp, and log out/in (again). Walk back to the building and go upstairs. Use the key on the chest. You'll be stopped, and asked what's wrong. Reply with "Fire!Fire!" until Captain Siad gets distracted (You can also search the bookcase first and then use the key and select following options: I want to have a chat?/Mention that he has a lot of books, then direct it to sailing/you can tell by his jib). Now you can search the chest again and retrieve the Technical Plans.

By now, you should know how to escape the camp. Do so, and walk back to where the Bedabin Nomads are. Talk to the chief, and agree to help make the weapon. Find the Bedabin Nomad Guard, and use the Technical Plans on him. He'll allow you to enter the tent. Inside, click on the Experimental Anvil and make a Prototype dart tip. Be sure to bring several Bronze bars, as it's easy to fail. Attach 10 Feathers to create the finished Prototype Throwing Dart. If players wish to make more they must drop the one they made. Additionally, players will be unable to make them after they give Al Shabim the Prototype Throwing Dart. After you hand it over, you will now be able to fletch your own throwing darts!

After receiving the Tenti Pineapple, take it back to the Mercenary and enter the inner parts of the mine.

Notice the mining cart nearby along with some barrels? Search the barrels to receive a Mining Barrel, then search the Mine Cart to climb on. It may take several tries, but after you're on, you'll be faced with branching paths. Take the northwest most path to find Ana. Talk to her and ask her about her name, then tell her that you could get her out.

Stuffing Ana into a barrel

Now use the Mining Barrel on Ana, and you'll get Ana in a Barrel. Backtrack towards the mining cart, and use the barrel on the cart. Do so again to get on; remember to search the barrels again to get back Ana! Use her on the Lift Platform, and talk to the nearby Mercenary.

Ana will insult the Mercenary. When asked what was said, reply "Gregarious" and he'll place the barrel onto the lift. Go back up to the surface and click on the lift near the entrance. Search the barrels to retrieve Ana then use her on the nearby cart. Tell the Mining Cart Driver that he has a nice cart, then keep telling him puns until he asks what you want. Say "Well you, see,its like this.....", and then tell him that there will be a prison riot in ten minutes. Now hop on to the cart to escape with Ana.

Talking to the Cart Driver

Walk back to Irena with Ana in a Barrel and you'll be granted a choice between Smithing, Fletching, Agility, and Thieving experience as a reward. You'll be rewarded twice; you can choose the same skill for both the rewards. Quest Complete! 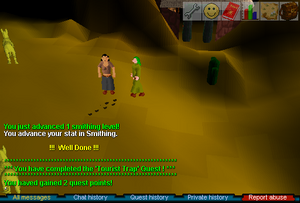