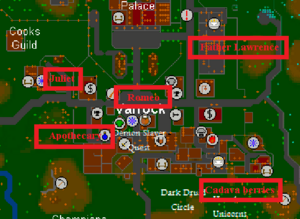 To start the quest talk to Romeo in the Varrock Square. Ask him about Juliet and he will ask you to see her. Head west and you'll find Juliet walking around in the house just west of Varrock. Talk to her and she will want you to deliver a message to Romeo. 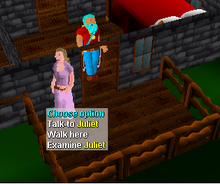 Go back to Romeo and talk to him. He'll read the message and learn that Juliet's father doesn't want them to be together. Juliet's message says that Father Lawrence may be able to help, so go see him. He is located to the north-east of Varrock Square, directly east of Varrock Castle and north of Varrock Museum.

Father Lawrence suggests that Juliet should use a potion that will make her appear dead and will send you to the Apothecary. The Apothecary is located in a building behind The Clothes Shop in the Varrock Square. Talk to the Apothecary, and he will say he requires cadavaberries to finish the potion. These are located on the south-east corner outside the Varrock walls alongside redberries. Once you have a bundle talk to him again and he will give you a cadava potion.

Go and speak to Juliet now, who will take the cadava potion and use it to appear dead. She asks you now to speak with Romeo to make sure he understands what is going on as "he can be a bit dense sometimes."

When you talk to Romeo, he takes the whole situation to mean Juliet is actually dead, completing the quest.