Dimintheis, who lives in eastern Varrock, needs his family crest to restore him to his rightful position in Varrock. He has three sons who split the crest and aren't talking to him or each other. You have to talk to each son and convince them to give you the crest fragments. The father gives you clues one at a time for the sons. Trying to talk to them before receiving the clues will not work.

The first son is located in Catherby near the members fishing spots. He is a Chef and you will find him cooking in one of the houses nearby. He will tell you he broke the crest up into three fragments, each held by one brother. He will not give you his crest fragment until you helped him with his salad.

After you given the 5 cooked fish to him, he will give you his part of the crest and will tell you the general location of his brother, advising that you should to talk to the Gem trader in Al Kharid. 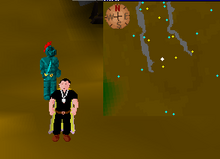 Talk to Gem trader in Al Kharid and he will tell you of a man in the Al-Kharid mine, wearing a yellow cape and standing by a gold rock. Entrance to the Witchaven dungeon east of Ardougne.

There are levers in the dungeon very much like those found in the quest Ernest the Chicken. To get to the gold:

Now that you have the fine gold you can make the ruby ring and ruby necklace, when you done this go back to the Man in the Al-Kharid mine and he will reward you with his Crest fragment. He will also tell you about his younger brother who has the last fragment of the crest.

You will find the third brother, a wizard, upstairs in the Jolly Boar Inn near the eastern wilderness border. He has been poisoned by spiders. Use your Cure poison Potion on him and he will tell you the location of the last crest fragment and how to kill the level 121 demon, Chronozon, which is holding it. 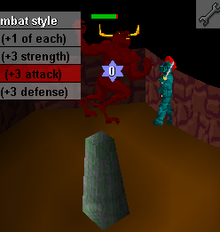 Before going to Edgeville Dungeon, make sure you have 4 Death-Runes, 5 Fire-Runes, 4 Earth-Runes, 3 Water-Runes, an Air staff and possibly cure poison and prayer restore potions. You need these runes for casting the elemental blast spells (Wind blast, Water blast, Earth blast, and Fire blast), all of them must be cast on Chronozon at least once in order to kill him. You can find him right at the end of the dungeon near the Earth Obelisk, past the level 156 black demons and level 63 poison spiders. After you kill him he will drop the third crest fragment.

Take the three crest fragments that form the family crest and return to Dimintheis. He will reward you with a pair of Steel gauntlets, and tells you to speak to one of his sons so that they may enchant them. Carefully choose which pair of gauntlets you want, as you may only enchant them once, although they will always remain in your inventory on death.

Most players deem the Gauntlets of cooking to be the most useful. Every pair gives the same bonuses as Klank's Gauntlets, making them useful for combat.

A player with both steel gauntlets and cooking gauntlets
Retrieved from ‘https://classic.runescape.wiki/w/Family_Crest?oldid=135047’
Categories: