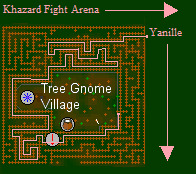 First, go to the start of the maze west of the Khazard Fight Arena. Follow the map to get through. Look for loose paneling and go through. Alternatively, players who have completed the Grand tree can skip the maze and use the Stronghold Spirit tree to get to the gnome village. Talk to Bolren near the Spirit Tree.

He will tell you about bringing an orb to the battlefield and that he needs you to retrieve it. Agree to do this and you will be teleported out of the maze. 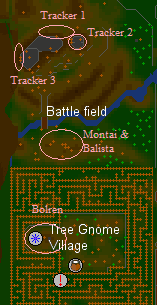 Go to the battlefield north of the maze and talk to Commander Montai. Talk to him again with six logs. Talk to him again. He will tell you to find the three tracker gnomes. Look at the map to see where they are. Each set of coordinates are different. Tracker 3 tells you a riddle. For instance, "Less than

my hands" would equal 1, where "More than my head less than my fingers" could be 2, "More than we but less than our feet" is 3, and lastly, "My legs and your legs" is 4.Make sure to write them down! After you get the coordinates, head back to Commander Montai. Click on the ballista and set the coordinates on the ballista and wait for it to hit (it may take more than one try.) 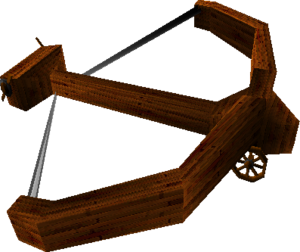 Location of the warlord

After hitting the wall, get some armour (cheap armour in case you die) a weapon and some food. Go up through to the Stronghold and get ready to kill a level 41 Khazard Commander. After you kill him head up the ladder, and search the chest. Take the orb from the chest and head back to the maze. Go talk to Elkoy and go through. After you get in the village, talk to Bolren. He will have some bad news and tell you that the two other orbs were stolen. Get ready again and go north to kill the level 100 Khazard Warlord. Proceed north past the battlefield a little ways until you reach the fence surrounding West Ardougne and follow it East until you see the Khazard Warlord who is wearing black armour.

Alternatively, players who have started the Plague City quest can safespot him by maging or ranging him from inside West Ardougne. Players who decide to do this, must also have the runes and level to cast Telekinetic grab to get the orbs he drops. After you defeat him, take the orbs and head back to Bolren. Look in your chat box and you will read about a ceremony to the Spirit Tree, and Bolren will flash blue as if teleporting. Quest Complete! 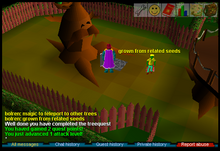