Banners were either static[Verify] or animated images located both above and below the RuneScape game screen. 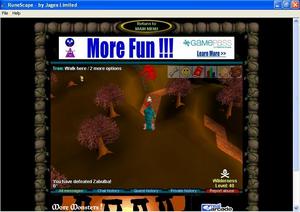 Playing with the f2p client 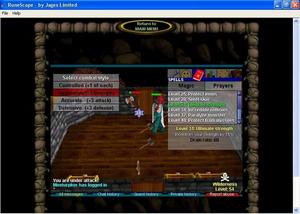 Playing with the p2p client 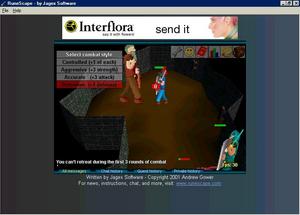 Areas above the client were the region where advertisements coming from supporters such as RealNetworks were displayed. There were also banners released by Jagex which were meant to build awareness of various things such as account security or reasons to become a member.

Prior to the release of Classic's Pay-to-play exclusive worlds and content on 27 February 2002, Jagex relied heavily on advert revenue in the form of banners and "pop-up windows" to cover the cost of the games servers. On 24 May 2001, Andrew posted an updated about removing the pop-up windows found on the website, and suggested that they would continue to be absent from the site so long as revenue from users clicking the banners didn't drop.

Players who were Members and logged to p2p worlds had the ad banners removed, leaving an empty space above the game screen. At a time before ad blocking utilities were commonly available, this could be seen as a major luxury to many players, and was touted as such. As such, a user experience without ads was a lucrative way for a webhost to tap into a premium revenue stream at the time.

Sample banners included but not limited to

The banners below the client were used by Jagex to remind players of the Rules of conduct and provide players with Security tips. These were incorporated in 2002 and expanded in 2003.

At the same time Jagex would also use banners to let people know about the Member benefits.

Although not frequently, the Jagex created banners were sometimes not displayed. In there place was the Jagex logo and a secondary advertisement such as "Phenomenal Internet Solutions Inc".

Note: In the second half of 2001 it was common to see a layout similar as the one above, as copyright transfer was being made from Andrew Gower to Jagex, whilst new banners hadn't been created yet.

RealArcade from RealNetworks was possibly the biggest supporter allowing to host directly Jagex games, such as GoldMine and Meltdown, and linking directly the Runescape game on their platform. As a sign of courtesy their banner was always placed to the right of the Jagex advertisement banner.