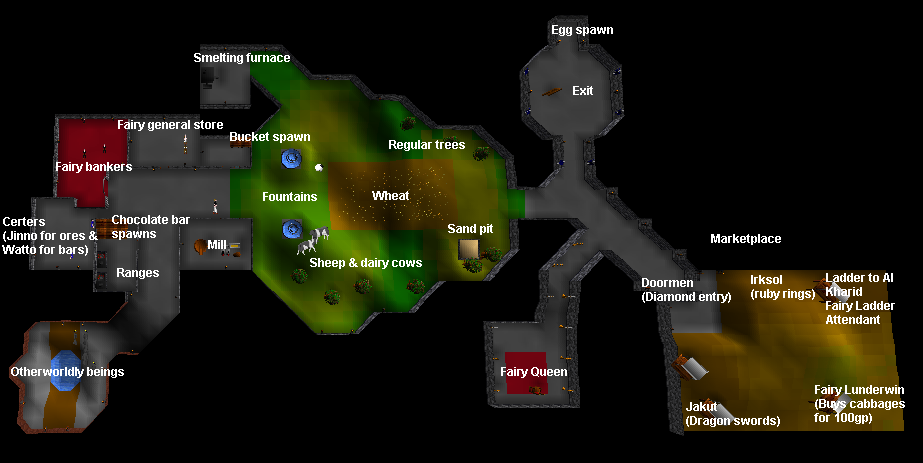 Zanaris is a hidden underground kingdom. According to the fairy queen, it is "a meeting point of cultures, those from many worlds converge here to exchange knowledge and goods". Accessing it requires completion of the Lost City quest.

During/after the completion of the Lost City quest, the player must attempt to open the door of the shack found in the Lumbridge swamp while they have a Dramen staff equipped, causing them to then be teleported to the fairy worlds entrance. It is noteworthy for having the only shop that sells dragon swords in RuneScape Classic.

The bank is located nearby many of the useful skilling features. This makes Zanaris a convenient location for killing Otherworldly beings, selling junk items to the general store, making dough, cooking, shearing sheep, and milking cows. However, shearing sheep and banking at Ardougne's northern bank may be faster due to the larger number of sheep.

Most players use the certers in Draynor and the range and general store in Catherby due to Zanaris being considered an inconvenient location to reach initially, and in the case of the range, not having any nearby fishing spots. Al-Kharid is generally the preferred location for smelting, because of the shorter distance between the furnace and the bank.

Some players choose to bank in Zanaris instead of Draynor when mining or collecting swamp tar at Lumbridge swamp.

The player must pay a trading tax of one cut Diamond to enter or exit the marketplace of Zanaris. An alternative exit from the marketplace is via a ladder which leads upwards to a location south of Al Kharid's bank. The marketplace is home to Fairy Lunderwin (who will buy cabbages for 100gp, which is not very efficient because of the high entry cost of diamonds), a ruby ring trader (Irksol), and the main attraction for players, a dragon sword trader (Jakut).