A guard is a monster found in most major cities in RuneScape Classic. They require level 40 Thieving to pickpocket, and provide 46.75 exp and 30 coins when successful.

During the Biohazard quest, the guard, guarding the gate to southeast Varrock will confiscate vials used in the quest.

The guards found in many locations around Gielinor are light skin toned men. Their uniform is a bronze medium helmet, a black shirt, iron chainmail, and black pants.

You impersonate a guard during the events of the Black Knights Fortress quest. 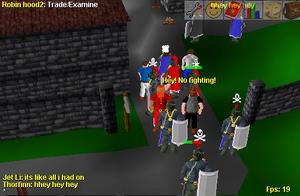