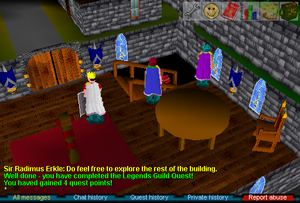 The Legends' Guild has the highest skill requirements to access out of any content in RuneScape Classic, requiring 107 Quest Points, 50 Strength (Super Strength Pot works for this), and completion of the Legend's Quest in order to enter. This guild is the only source of the Cape of Legends and the right Half Dragon Square Shield.

The guilds entrance is closed off to non guild members and those who are not currently doing the quest. The entrance to the Legend's guild courtyard are a pair of Wrought Mithril Gates gates which are flanked by two Legends Guild Guards. There are several shrubs and a fountain within the courtyard. Sir Radimus Erkle is in charge of the Legends Guild and his house is outside the main building. Inside the building is a desk and a cupboard which contains a machette. If this cupboard is searched with a machette in the player's inventory, the following message is displayed: "The cupboard is empty."

In the main building's ground floor[UK]1st floor[US] there is a Totem Pole, round table and a throne.

Fionella runs the Legends' Guild General Store on the 1st floor[UK]2nd floor[US], up the stairs on the ground floor[UK]1st floor[US] of the main building. Her store is the only shop selling Apple pies and Steel Arrows in the game.

Interestingly, Sir Radimus' house also has a 1st floor[UK]2nd floor[US] but there is no way to access it. 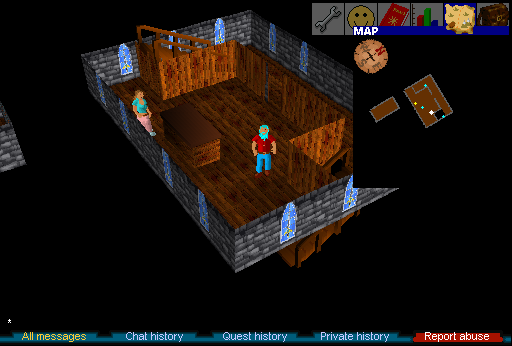 The top floor contains the guilds bank and its bankers. The shop keep may also be found here. Siegfried Erkle who runs the Legends' Guild Shop, is the only vendor of Mithril seeds, the Cape of Legends, and the right half of the Dragon Square Shield. 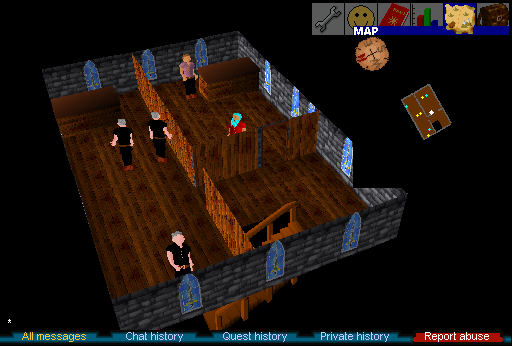 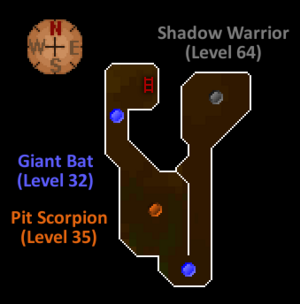 A map of the dungeon beneath the Legends' Guild

The stairs which are going down in the main building lead to a small dungeon with 10 Pit Scorpions, 4 Giant bats and 6 Shadow Warriors.

The main draw to this dungeon is credited to Shadow Warriors which have an increased chance to drop rare items such as the left Half Dragon Square Shield. Pit Scorpions have also been noted to offer a decent amount of combat XP per hour to those fighting them, although they drop nothing at all meaning there is no profit in fighting them.