The bank vault is a piece of scenery only available at the basement of the western Varrock bank. It features 6 coin spawns, 2 brass necklace spawns and 2 gold nuggets spawns. Players cannot access directly through the gate, attempting to do so will yield the message the gate is locked. The spell telekinetic grab may be used on the vault's items.

The coin amounts a player may get per grab are: 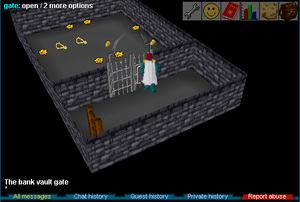 In the day of release (23 January 2001), people went into venturing into the vault to see the items and got stuck inside.[1] This was later on fixed so people could just see the vault or have to telekinetic grab individual items.

Outside of the vault there is a coin spawn of 3 coins. 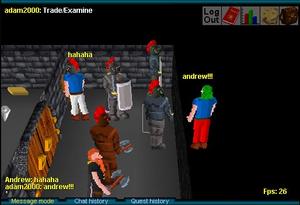