From RuneScape Classic Wiki
Jump to navigation Jump to search
The Old School RuneScape Wiki also has an article on: osrsw:Inaccessible areas 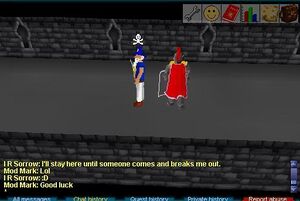 A misbehaving player imprisoned in a normally inaccessible area, the upstairs of Al Kharid Palace

Inaccessible areas are areas that exist in RuneScape, have ground, and hypothetically could be walked on, but players can never actually access.

These locations exist for a variety of reasons. In the distant past, when a new area was about to be added to RuneScape, it was common to fence off the area but allow players to see enough of it to get excited. Modernly, inaccessible areas are often purely for aesthetic appeal. Sometimes inaccessible areas do serve a function, such as the Lesser demon cage in the Wizard's tower, which can be used to train magic or ranged. Other times, it seems like an inaccessible area may have been somewhere that Jagex planned to expand, but never got around to in RuneScape Classic.

There are many buildings and other structures that cannot be entered.

Although all buildings with at least two floors must have walls defined on the upper level, it is not common for there to also be flooring defined unless players can access it. The presence of an inaccessible second floor may imply that the developers intended to make an upstairs and didn't get around to it.

These sections of the map are specifically cordoned off in order to contain whatever is inside, and to keep the general public out.

These inaccessible areas were placed as aesthetic dividers between regions. They're included either to more gracefully transition between land and sea, or to imply the existence of a larger area that continued on.