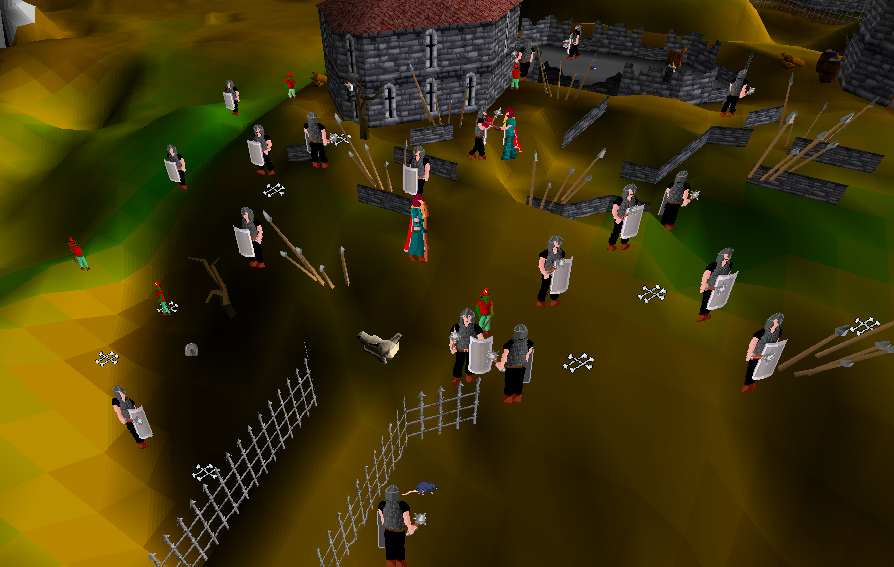 The Battle field is the location in Kandarin of a current battle being fought between Gnome and Khazard troops.

The area has a river flowing through it with a bridge in the middle of the battle field. On the North side of this river are Khazard's forces. To the South are the gnome troops. The gnomes walk radius allows for them to cross the river however the Khazard's troops will never cross the river.

Just to the south of the bridge is a Ballista. This has a fire option but if you attempt to fire it a message states that it is broken.

There is a Medium Iron Helmet spawn just to the North of the river, along with many[Clarify] nearby bone respawns. Bear in mind, that the Khazard troops are aggressive towards the player. There is also a rat which spawns near the bridge, and an ever burning fire found in the gnome area of the battle field.

The battlefield is popular for prayer training because of the large amount of bones lying around. It is also common for players to train combat here due to the high density of Gnome and Khazard troops. Some players choose to fatigue train here because of the close proximity to a forest from which they may easily gain fatigue.[Clarify]